In The Wintersmith, Sir Pratchett reacquaints us to young Tiffany Aching, a new witch who has been “making her bones” on her side of Discworld.

Tiffany while under the care of the witch Miss Treason, has found herself in the middle of certain Goddesses and Elementals. The main elemental being the Wintersmith and as a result of Tiffany’s interference, she has gained the affections of said Elemental. This further results in your usual slew of Discworld shenanigans.

While I have only been introduced to Ms. Aching through this book (her previous books being A Hat Full of Sky and I Shall Wear Midnight) I still enjoyed the hell out of this book.

Terry Pratchett had that rare gift that most fantasy writers lack: He was able to write a book series that you can drop down right in the middle of and still be able to figure out what’s what and who’s who without having to consult Wikipedia. Suffice it to say, I didn’t know who half these “regular” characters were and I was still able to catch as catch can.

An added bonus of this book (at least for people who are new to Sir Pratchett and who either don’t like the mythology behind Discworld or else they just don’t get it) is that there is very little Discworld geography included in this book at all. In the previous books of his that I have read, I have found it a bit hard to understand all of the places and turn’s of phrases that he has created because they were originally brought up in other books of his that I haven’t read yet.

This isn’t the case with The Wintersmith. Pratchett doesn’t disappoint. If you are new or if you are a regular reader, do yourself a favor and go out and pick this up.

I have yet to find something of Sir Pratchett’s that I just can’t read. He’s the type of writer that has that uncanny ability to make anything sound interesting as long as he’s the person doing the writing.

Regardless, The Wee Free Men really isn’t really about The Wee Free Men. Rather it’s about a certain Ms. Tiffany Aching, young witch to be. I first came across Ms. Aching and The Wee Free Men by way of the book, The Wintersmith. My only problem with that was that that book (The Wintersmith) should have been the next book to read, not this one. At any rate, I wanted to learn more about the Wee Free Men so I picked this book up at my library and the rest is history.

If there was one thing that I truly don’t like about Terry Pratchett and his Discworld books is the fact that there is indeed so many of them that it’s hard to tell which one came first.Some of them are a part of a series, like the Tiffany Aching stories. Others, are indeed a new(er) story but they feature return characters (like any of the titles that have to do with The Watch). Book stores should have a separate Discworld directory to satisfy the shoppers.

The Wee Free Men is the first book in which Tiffany Aching appears. A nine-year-old farm girl who has always had a keen sense of herself, Tiffany finds herself in the position of being the only person in her village who can rescue her toddler brother from The Queen of the Elves. Along the way, Tiffany discovers a clan of fairies that go by the name Nac Mac Feegles (aka The Wee Free Men). Together, they join forces in order to rescue Tiffany’s young brother and bring everyone home safely.

This book, like all of Pratchett’s books are well worth your time and investment. Go now, and find yourself lost in another well written story, ya wee scunner!

***At the time of this writing, Sir Pratchett had announced that he will be handing over Discworld to his daughter, Rhianna Pratchett.*** 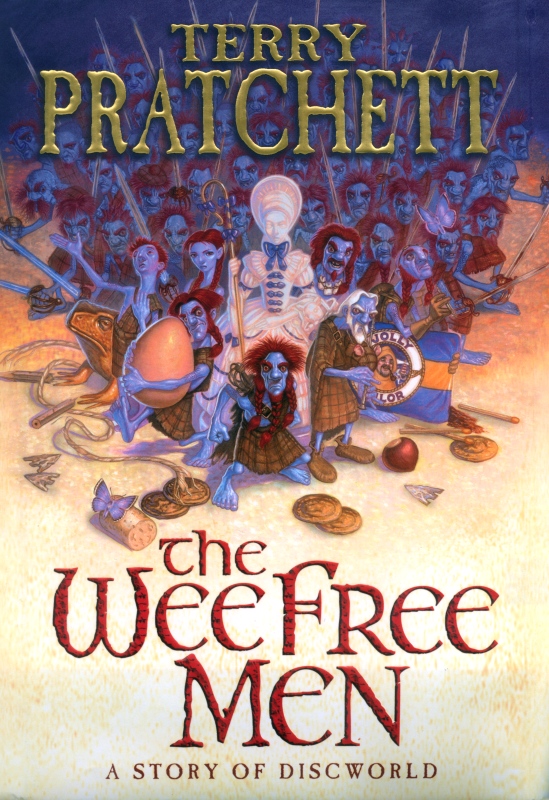