Towards the end of living with my mother I had a small coffee pot in my room just for me. My wife, at the time she was my girlfriend, always found it amusing.

Seriously, who has a coffee pot of their own in their bedroom?

At any rate, I like coffee. All of the vices of my youth are now extinct. No more drugs. Drinking has dried up to a trickle. Cigarettes have been gone for nearly a decade. My faberge egg addiction has been kicked. 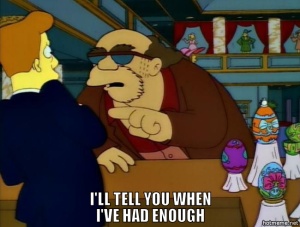 I am rather tame and boring by my own estimation. So you see, if it wasn’t for coffee I wouldn’t have any personality at all.

Last year, my wife landed employment for a very prestigious institution. As a reward for herself, she wanted a Keurig. Given that she had to crawl through shit to get this job, I didn’t fight her too much. Truth be told, I didn’t want the fucking thing at all. They’re existence in the universe has never made logical sense to me: You have to make a fresh cup of coffee, every time you want coffee? And, the little k-cups cost an arm and a leg? NONSENSE. I DON’T LIKE CHANGE.

So we go to the store and she enlightens me to the features of the Keurig.

You don’t have to buy the cups, you can get a little filter to spoon your coffee grounds into. Also, the machine is basically a big hot water dispenser so you can make tea. In sum, I saw the use it could have in our home. I still didn’t like it, though.

We buy it. Take the thing home. Run it through with just water to get smell of plastic out of the fucking thing and the rest is history.

The Keurig has been a part of our family for the past year.

One day, I make my customary cup of coffee to get my brain working in the morning. I lift and depress the play-doh factory lever that tells the machine that it’s time to get to work and on the readout I see the word “de-scale”.

Frowning in response I say, “I don’t speak your language, but you better give me my cup of coffee, you little shit-stain” as I push the button that fills my cup up with the steaming, oily truth.

It fills my cup 1/3 of the way and sputters.

Apparently when your Keurig displays the word “descale” it roughly translates into “The person who is trying to make their cup of coffee is about to drown in a frothing rage”.

I immediately consult the junk drawer.  You all know what I am talking about: no kitchen is complete without the one drawer that holds all of the shit that doesn’t have a proper place in your house PLUS all of the instruction manuals for all of the things that you have bought.

The instructions weren’t there. Off to Google I go!

The only thing that I could find was this over at Coffee Detective.

Yes that’s right, I ditched the water tank, unplugged the son of a bitch, turned it upside down and proceeded to beat it like it owed me money.

‘Descale’ went away but it still didn’t work. Keurig only gave me a fraction of the caffeine I needed. I make another cup and ‘descale’ comes back again.

At this point, all of the veins in my face and forehead are bulging. I am sweating with fury.

I then proceed to run vinegar through the system because I know that works. I have had to do it before with older coffee pots.

I load the tank up with straight vinegar and proceed to “make coffee”. After I run through the vinegar, I run a tank full of water through the system for good measure. No one likes tangy coffee.

After I run through a tank of water, ‘descale’ goes away. Everything in me unclenches and I proceed to make a legitimate cup of coffee.

Yet another cup with four drops of coffee in it. As the Keurig sputtered it’s signs of completion, tears welled up in my eyes as ‘Descale’ returned, mockingly victorious.

Defeated, I ran the coffee again in an attempt to get at least half a cup.

Later on, I had an idea. I checked the filter that we had been using for loose coffee grounds.

Yep, dirtier than a motherfucker. We replace the son of a bitch with a new filter and it’s been kicking out the coffee ever since.

Lesson learned: the simplest solution is usually the best.