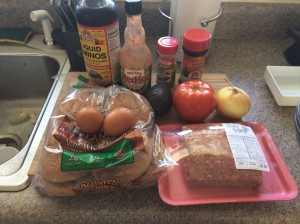 This is a general list. Don’t take it as gospel. At the core of any burger is the meat and the egg (because it acts like an adhesive that holds the meat and goodies together). To make a Daniel J. burger you need those two things and a good onion. That’s it. 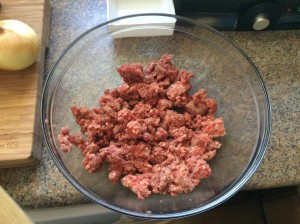 Take the meat, break it up in a bowl with a spatula or whatever you have handy. 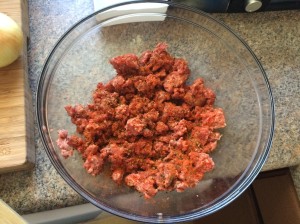 Start with the dry stuff first. Don’t just dump it on there and leave it, dummy. Mix it in with whatever the fuck you used to break up the meat. 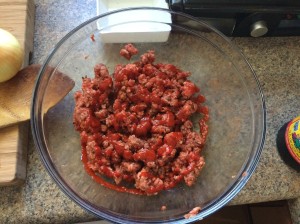 Do the same thing with the sauces. Yes, you have to mix that in too.

3. Put the meat to the side and cut up the onion. It’ll give the beef a chance to suck up all of      that goodness you just assaulted it with. 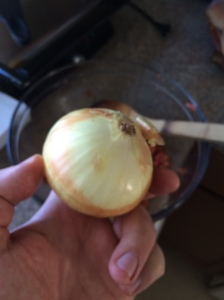 Behold! The Might of the Onion! As it makes most things tasty! 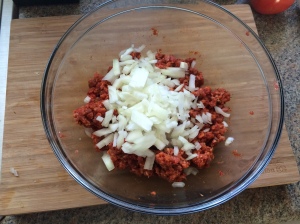 After the onion is chopped to your liking, add it to the meat. 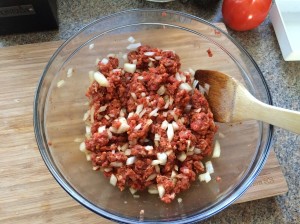 Then, do the same thing you did with the sauces and spices. Mix that shit up real good homey!

They don’t have to be brown. I’m not an egg snob like that. They can be whatever you want. I just happened to have brown on hand because The Wife wanted them. I will say this though, in terms of fried eggs and omelets and such, the brown egg is unparalleled. Too bad it costs too damn much. 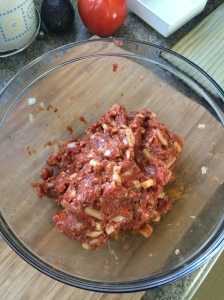 Crack the eggs and start mixing that shit with your hands. This is what it looks like when you have done it right. 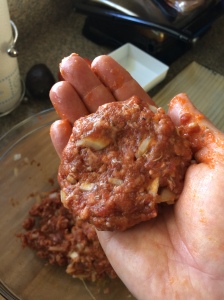 I don’t know what the proper ounce rate is for a burger. I generally try and make them a bit on the smaller side so there’s left overs and because my peeps don’t eat with wooden legs in mind. 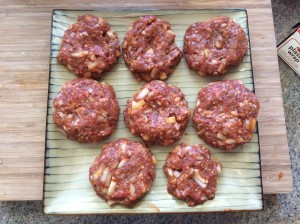 Put that shit on a plate, you patty making fool! 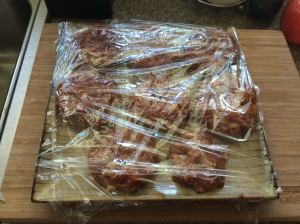 When you’ve gone through all of the meat, wrap that shit with plastic wrap. 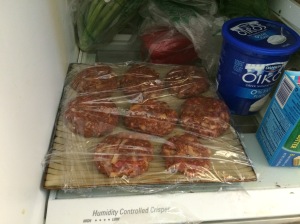 Then put them in the fridge. Most people would dispute this, but I swear by it. By letting the meat chill, you’re letting it recoup thereby ensuring that the patty keeps it’s shape. I’ve made burgers without this step and they’ve always fallen the fuck to pieces on me. Generally, I let them chill for an hour. You don’t want to let them sit for too long. If you do that, you’ll start losing juices. *Beavis laugh* Juices. 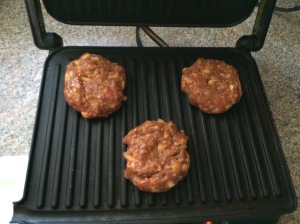 There’s plenty of ways to cook a burger: grill, pan fry, baking, whatever. I used the panini because it cuts down on the cooking time. It’s a bitch to clean but it’s worth it. You just have to make sure the fucker is hot enough. 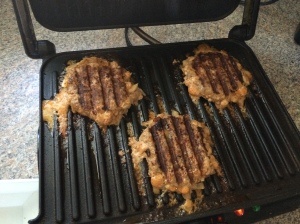 Yes, the panini cooks on both sides. Mine is cheap so I still have to flip whatever I’m cooking on it to get the same look on both sides. This was after one flip.

See? Burgers are easy. Cooking is easy too (just so long as you don’t freak out and act like a little bitch).

In the end, regardless of who you are and in spite of what you have going on in your life, cooking is an essential skill.

Got a burger recipe? Wanna let me have it for the amount of “fucks” I put in my entries? Sally forth in the comments at the top of this post!